Last November, 2019, The Dark Outside had a call out for sound works. The original plan was to have a 24 hour radio broadcast of sounds, words, and music that had never been heard before and was to be broadcast from the iconic location of the  Kurt Schwitters’ Merz Barn as part of Aerial Festival, Cumbria. This was due to take place on March 28th, 2020 and was to be renamed the Da – Dark Outside in honour of the Dadaist movement.

No – one knew that only a few months later the world would be engulfed in the Covid – 19 pandemic and all things physically social would grind to a halt in lock down.

Or so it seemed…

Art has a way of finding a way to express itself, its like a dandelion to the sunlight.

Not to be beaten, and in true last minute fashion, the postponed Da-Dark Outside meant for 28th March still went ahead online via furtherin.live  on Saturday 4th April. It began at 12 noon UK time and was wall to wall sounds, noise, voice, poetry, and everything else for 29 hours, when there was nothing else to play that had been sent in. There is a list of all who took part here.

I decided to create a Dada themed piece specifically for this call out by Dark Outside, especially as this year, the broadcast location was to have been the Kurt Schwitters’ Merz Barn and despite being now re branded as The Da- Dark Outside Inside, I was elated to hear it over the airwaves at about 1.41pm.

Many of my sound works are about the connections between the visual and sound. The written word, especially poetry, sounds in my head when I read it and so I knew that my piece would be based on Dada poetry, which bridged the gap between the word and musical composition, where phonetics took centre stage rather than conventions and syntax. Also,I wanted to combine some of the methods of the Dada visual art movement, such as collage and cut up, in the process of creating this piece.

Dadaist Take is in two parts –
I recorded the instructions for creating a Dadaist poem by Tristan Tzara (1920) and got the on-board ‘read aloud voices’ to read the words, which came out quite robotic and without intonation. I decided to use a non human voice as I thought it would be interesting to see if I could create a piece that sounded like sound poetry. I then put the instructions through a Dada Poem Generator, which created a Dada poem out of the instructions. I then applied Tzaras’ instructions to create the piece itself, using cut up, montage and rearrangement of the sound files.

I then applied the same process to two of Hugo Ball’s poems – ‘Gadji Beri Bimba’ and ‘Wolken’. I also put these through a Dada Poetry Generator, creating Dada poems out of Dada poems.

Needless to say no one had heard this before broadcast but you can listen to the sound file above. Apparently, there are plans to rearrange the festival for September 2020, when there will be an attempt to broadcast from the Merz Barn. I plan to create a new Dadaist sound piece for this.

Dadaist Take uses the 1920 instructions as the basic rules to create the whole sound piece. As an aside, I also created artwork which also went through the same process – rules, cut up and montage of the Hugo Ball poems. Here are some of the pieces I created – 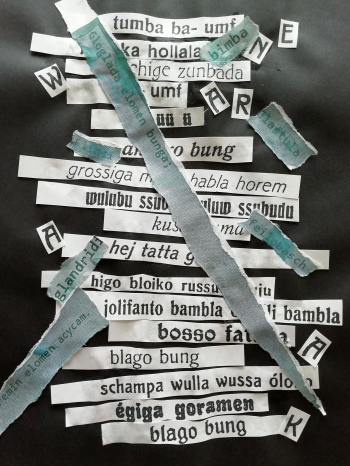 Finally, I wish to thank The Dark Outside for including my track and all respect to them for their dedication and resolve under such unforeseen circumstances. It was a brilliant listen.