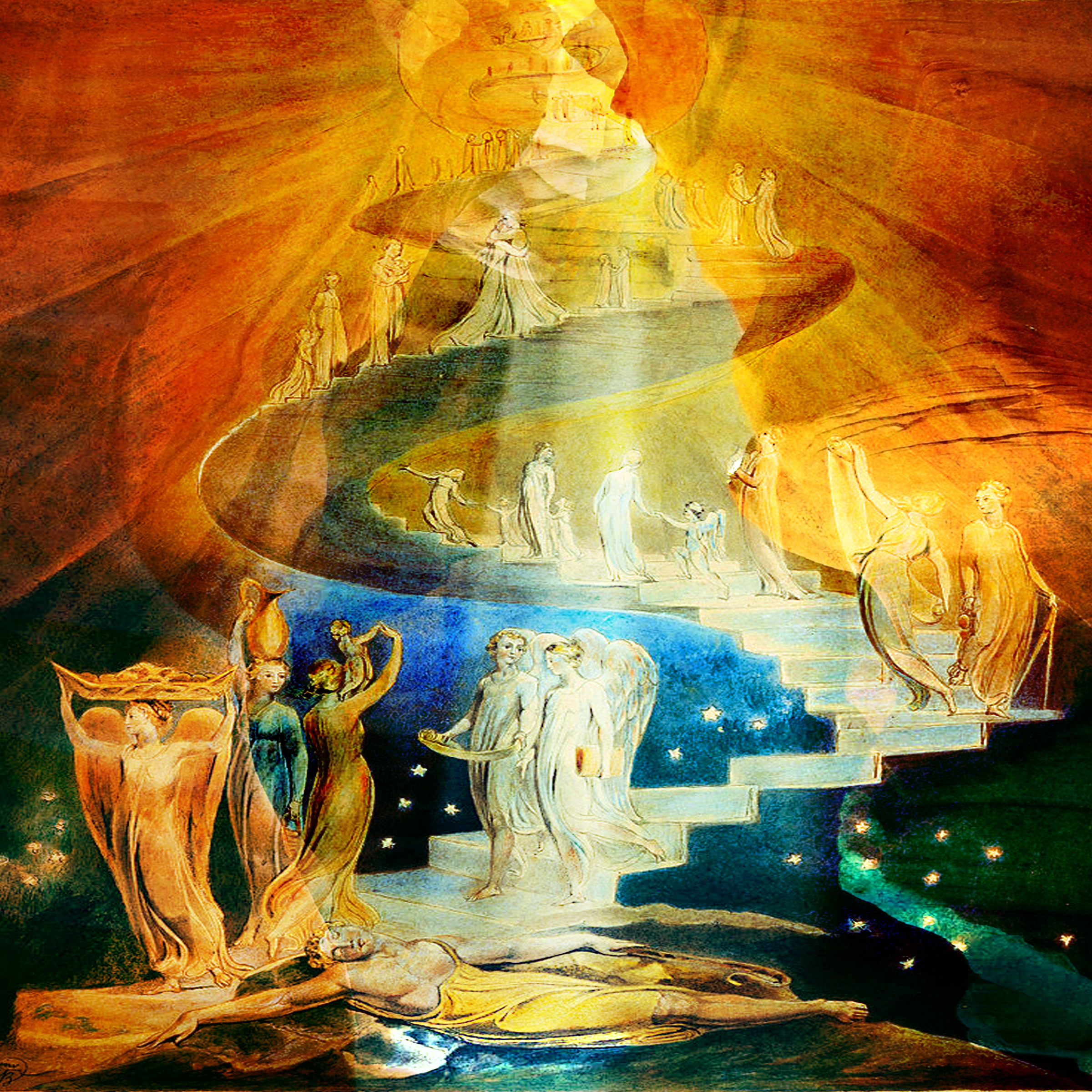 The Edges of Dreaming set a challenge to create a musical dreamscape, one which is open to interpretation stylistically.

For this this track I had two inspirations.

Let’s begin with some art, which is often the starting point for many of my tracks. I went for an artist whose painting has a dreamlike quality and a purpose built subject – Jacob’s Ladder or Jacob’s Dream (1799-1806) by William Blake.

In Blake’s painting, he took a radical view of the story, as told in the book of Genesis, chapter 28, verses 10-19. The huge staircase leads up to a fiery sun through stars and the heavens, whilst the dead souls wander and dance up and down connecting heaven and earth.

Secondly, I have always loved Gaelic singing and especially one style of singing, that sung in small rural Scottish island community churches – Psalm Singing – a call and response similar to American Shape Singing, which has for me, although I am not a religious person, an otherworldly sonic palette. I began by using a field recording by ShiftingWaves of Psalm 34, Gaelic singing Leverburgh, Harris

Strangely, the words of Psalm 34 seem to fit the message of Jacob’s Dream

The Lord is close to the broken hearted and saves those who are crushed in spirit.

I edited and added effects to the soundfile to make it more ethereal and distant and built sounds around it to represent elements in the Blake painting, such as shafts of light, the fiery globe, chanting, speaking in tongues and heavenly trumpets and although this track is better suited to listening through headphones, I hope the overall effect is one of a strange but beautiful dream.

The piece Jacob’s Ladder was aired on 30 / 3 /2019 ( 41 minutes in ) and you can hear the podcast here with the full show and the many varied interpretations of Dreamscapes created by a wide range of ambient / space artists.

Also thanks go to ShiftingWaves for allowing me the use of the soundfile of the Harris church congregation, which is the basis of this track.

Artwork is by Museleon based on Jacob’s Dream by William Blake, the photographic reproduction of a two-dimensional, public domain work of art via Wikimedia Commons

Jacob’s Ladder is now on this release from Radio Spiral

You can listen / buy the release of all the tracks included in the radio show here (pay what you like). All proceeds go to Radio Spiral, which enables artists like me to keep experimenting, creating and producing music.