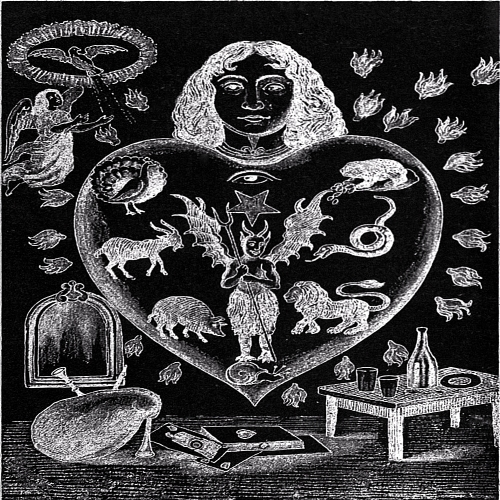 The Inner Heart by Museleon

My piece is based on a 17th Century plate (above) from the Tableau de Mission by Francois Marie Balanant. This is an allegorical image which depicts the Deadly Sins in their animal guises contained within the human heart. The piece consists of seven tracks each representing an animal: Gluttony (Pig), Pride (Peacock), Sloth (Snail), Envy (Snake), Wrath (Lion), Avarice (Toad) and Lust (Goat). Each sin is depicted sonically, either by actual field recordings of the animal sounds or created in the studio. All sounds have been edited, looped, and processed to change the overall dynamics and make them less obvious. Hence the Peacock drone that begins the piece, with changes in pitch and speed, sounds nothing like the original calling birds.

Other field recordings / samples used are the goat bleating that underpins the track, the wailing lion, toads and frogs in a pond, and pigs in a shed. I created the snake track in the studio on synthesizers, as I wanted metallic hissing and spitting snake effects. To represent the snail, I used a sample of a snailhorn, often used in ritualistic ceremony, as a warning or call to war.  As in the original image, the animals or sins all combine to hopefully create a foreboding and dark atmosphere of The Inner Heart.

Here is the full collection –